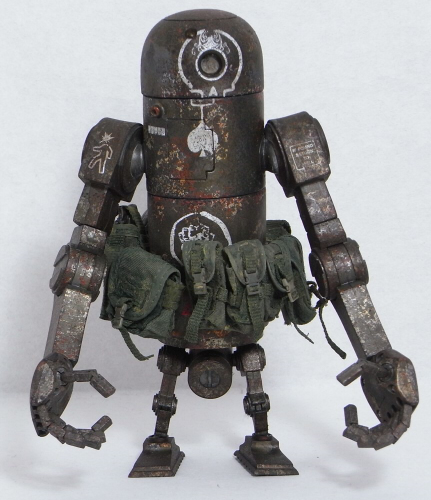 Zak solves the game problem of crewing up the adventurer’s spaceship. I envision the Deeps of Lyrae campaign will include a lot of spacefaring. I’m going to get the players into a spaceship and have them embark on a life of space piracy.

However, I’ll need to crew up this spaceship first. I’ll try to design a spaceship — to be discussed in a later post — that can be crewed by approximately the number of players that I have, but I doubt I will be able to get a perfect match between the player desires for specialization and the skills that are needed to operate a starship.

Rather than specify a bunch of NPC crewmen or one generic NPC ally (we call these “redshirts” in this business), I had the idea of using a robot with modular memory. I could then have the robot NPCs replace whatever skills were missing from the PCs.

All of the spaceship designs I’ve been looking at require a bunch of technicians, so in all likelihood this robot is going to be an engineering robot. That’s also because as the GM I like the idea of big, complicated wonky, tech-y spaceships that require a lot of maintenance and tinkering.

I had already decided that robots are rare and on the backwater planet where the players will start they will be almost unheard of. That gives me the idea for an…

Since robots are rare, obtaining one at all would be a good first adventure or mini-adventure. On the planet Family Whee, robots are so rare as to be reserved for hazardous applications.

“If we ever expect to get launch clearance, we need to sign on a certified reactor mechanic!”

When the party finds that it doesn’t have the crew needed to get off-planet, they might try to hire out for the skills that they need.

The would-be pirates can search for a suitable crewman to hire (e.g., at a union hiring hall) but finding the right skilled crewman just waiting for a job on this lonely outport is extremely unlikely. Barely any spaceships visit here, so why would there be a grounded spacer looking for work? (A non-space-specific specialty would be easier, such as security officer or medic.)

Yet there’s another problem: If they do find crew, they’ve almost certainly found an average, honest crewman-for-hire, not someone ready to sign on to a life of crime. (Remember, the players are signing on for a life of crime.) In these parts, piracy is even rarer than spaceships. How do they explain their criminal intentions?

They might not explain themselves and later tell the hired NPC crewman to “just follow orders!” But when they start breaking laws the crewman will revolt.

A solution that motivates this adventure seed is that they might think of (roll vs. IQ) hiring a robot crewman. Robots are rare, expensive imports here, but they exist. If the PCs are mudpuppies who grew up here in the boonies, they may never have seen a robot except on the Tri-V.

A fully-featured robot will cost millions of credits, but they could find an outdated, crappy one. That is, Zak. The adventure seed basically has three parts:

I’d also add some dead-ends along the way. For instance, they could try the hiring hall first.

Back Story: Zak the maintenance robot is one of the very few robots on the entire planet of Family Whee. He is owned by Betsy’s Rent-All, located in downtown City (the name of the only city is “City”). He’s rented to people who operate large fission reactors when the rare maintenance situation comes up that involves potentially opening the radioactive core.

Appearance: Zak is a large garbage-can-shaped robot who is very roughly humanoid. His long, dull green metal torso is so tall he barely fits through doorways (and often has to crouch). He has a rotating, R2-D2-style head with a sensor package at the front, two heavy arms ending in five-figured hands that allow both fine manipulation and heavy lifting, and (in contrast to his torso and arms) two tiny little legs ending in flat feet.

His beefy forearms contain a wide range of integrated tool packages hidden behind sliding panels. These tools allow him to complete mechanical, engineering, armoury, and electronics tasks without other equipment. (Zak does not have tools for e.g., carpentry, chemistry, or anything else not mentioned here.)

Zak looks like he is in rough shape. He’s noisy when he moves and his body is covered with patches of old paint, dents, rust, and stains. However, he is a sturdy model and he actually operates just fine.

Weapons: There is no reason for Zak to be armed, but he does have an integrated fire extinguisher in his right arm, as well as an integrated cutting torch in his left. (And he’s ambidextrous.) He might be able to defend himself with these, or even attack someone, except for the fact that he is programmed to be a pacifist.

Sensors: He also has a spotlight mounted on the front of his head, and can see via his camera, and has an infrared filter. In addition, he employs a laser-like scanning radar that allows him to read the part numbers off of equipment (like a supermarket barcode reader). He can also use this para-radar to “see” at short range if there is no light or heat and his other senses are useless. His sensor package has hearing that is better than the human norm.

Equipment: Zak of course needs no clothing, but he often wears an olive green canvas utility belt with a variety of large pouches for parts and equipment. If necessary, he can store a small item inside his own body by treating it like a tool that is part of his on-board toolkits, described above.

Chassis/Power Supply: Designed to accomplish the hard stuff, Zak is large, armored, radiation-shielded, and strong. He operates on a hydrogen fuel cell. Perhaps this is because hydrogen is the fuel source for jump drives? This may hint that Zak was a spaceborne robot at some time in his life, but he has no memories of it. His cutting torch runs on an onboard tank of oxyacetylene.

Skills: As he is meant for fission reactor maintenance, he has skills that allow him to do that. He also knows how to handle radioactive hazardous materials. He knows how to use his on-board equipment: he can fight fires with the fire extinguisher and cut as necessary with the cutting torch. As a robot he can automatically do things like solve math problems… but he’s not good for much else. As he has a modular memory he could be programmed to do other tasks.

Personality: Zak is not meant to be a charmer. He has a robotic voice and although he is sentient no attempt was made at a human personality. Talking with him is then more like talking to a sentient Leatherman multitool.

Motivation: The players might decide to grab Zak as a useful crew member for their spaceship but this will involve stealing him. Betsy’s Rent-All will not rent Zak without a deposit that covers his entire value, and the players (I know how they think) will not want to buy him at full price. However, Zak has a slave mentality and does not want to be stolen. He is bonded to his owner.

I’ll try to stat up all this stuff in the next few posts.

For Zak’s image I’m using a photo I found of a robot figurine by searching Google for “robot” images. However, I don’t know who made this figurine or where it is from. I just really, really like the look of it. Let me know if you have any idea what this figurine is supposed to represent. I really love its battered appearance and tiny legs.