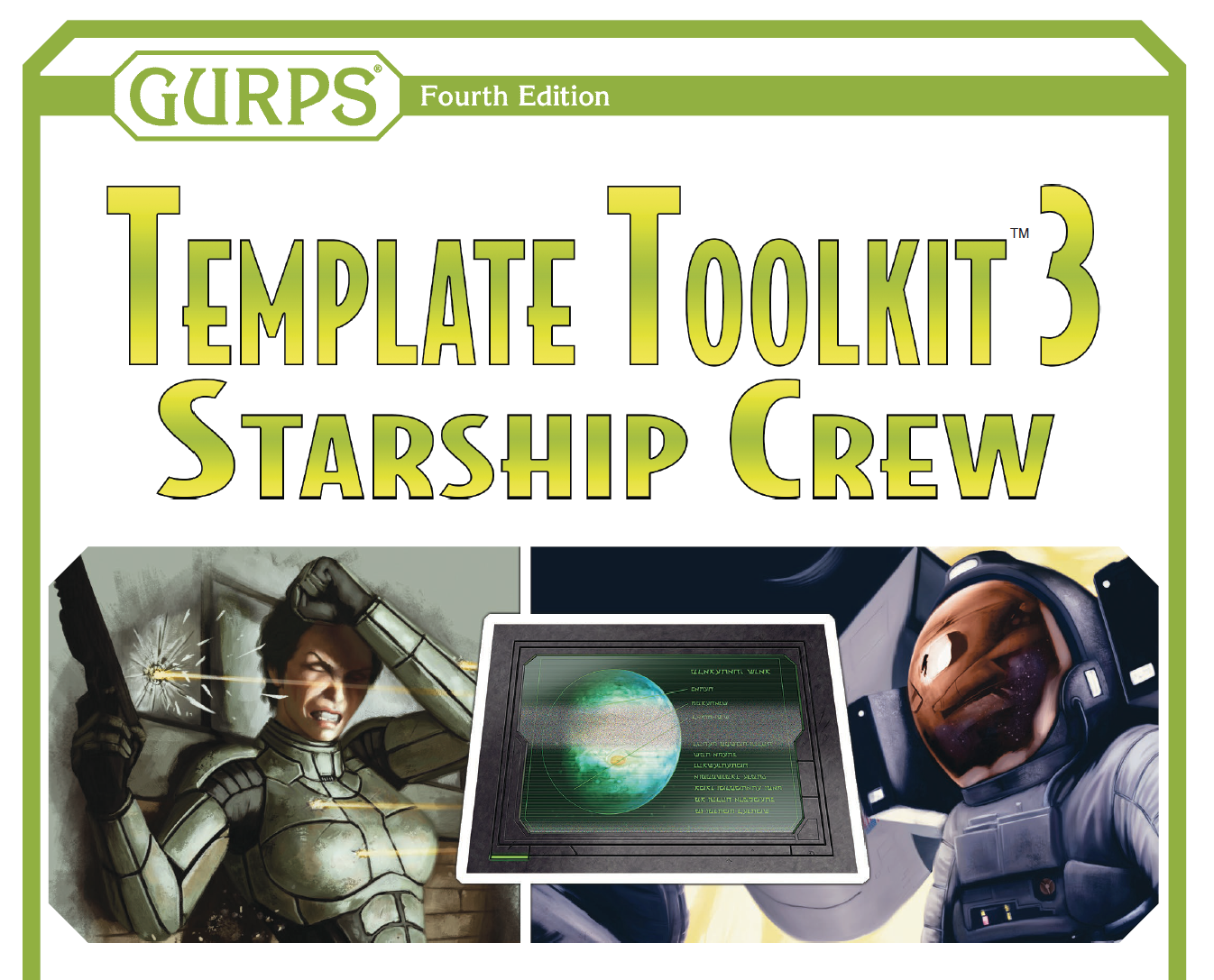 I’m obviously a huge fan of GURPS and sci-fi spacefaring is my main bread-and-butter gaming setting right now. So I was delighted to see that a 12-page PDF available in the GURPS 2020 PDF Kickstarter Challenge was “Starship Crew.” (More formally: Template Toolkit 3: Starship Crew.) I always need starship crew!

I now have my hands on it, so here is a quick review. Note that I obtained the PDF through the kickstarter, but the kickstarter states that this PDF will be purchasable independently soon at Warehouse 23 and other outlets.

This Isn’t a Template Toolkit

That’s too bad because this seems to screw up the naming conventions for the GURPS template toolkit line, and it misleads the purchaser. In the past character templates have been in the back section of worldbooks, or they’ve been stand-alone PDFs with titles like: “Dungeon Fantasy 1: Adventurers” or “Action 4: Specialists.”

Looks like they didn’t have a numbered series where this fit, so they stuck it in the “Template Toolkit” series, which doesn’t make sense. I guess this is pretty nitpicky, but I feel like GURPS is usually more careful with this stuff!

This could help newcomers to GURPS (I suppose?) — if they didn’t already have any other books they could buy just the templates in a 12-page PDF. For the GURPS veteran, in contrast, there are already a lot of starship crew templates around in various GURPS books, so I was looking forward to the meta treatment of their templates, but this book isn’t about that. Too bad.

A Lack of New Material

Second: This book does not provide new material, with a few exceptions.

But there aren’t any new ideas in here to add to my lists. These templates are a different take on the character templates that start on p. 227 of GURPS Space. Skimming quickly, it looks like “Steward” in this PDF is a new idea that did not appear in GURPS Space, and “Loadmaster” was sort-of a part of “Space Worker” in GURPS Space and not well-developed there. Yet these skills are already subsumed in the “Deckhand” template over in GURPS Traveller: Interstellar Wars. Indeed, these two ideas were broken out independently with more detail in GURPS Traveller: Far Trader (3e).

I’m not against consolidating and updating good ideas from old books. Indeed, there are a ton of neat ideas for starship crew that could have been brought together in one place and updated for 4e or expanded upon, but this PDF doesn’t do that.

GURPS sci-fi worldbooks in the past have had plenty of cool starship crew character design ideas that I’d like to see developed, updated for 4e, or even just organized. How about:

In contrast, this PDF sticks to the basics. It seems to have the 1966 version of Star Trek’s bridge in mind a lot of the time. That’s OK, but it is one particular old-school vision of starship crew.

In GURPS Space there was mostly just one template for starship crew (Astronaut), and lenses modified it for each job (Captain, Fighter Jock, Engineer). GURPS Traveller: Interstellar Wars has seven separate templates for these crew (Commander, Bridge Officer, Scientist, Doctor, Marine, Engineer, Deckhand) with no lenses. In contrast, this PDF has ten new templates, which seems much better — but these are mostly the same template with minor changes.

Considering GURPS character design in general, I think fantastic things can be done with lenses and I’ve been trying to take the lens advice from Template Toolkit 1 in my own templates and provide meaningful choices that are simplified for the players. (Here is one example I am proud of: check out the lenses on this Ruler.)

But all of the templates in this book have the same two lenses: “Legendary” or “Multi-Role.” There’s not a lot of thought here given to questions like e.g., “What are the different possible takes on a Science Officer?”

In addition, some of the templates are quite rigid and make what seem to me to be somewhat unusual decisions. While I totally see that a template is a particular author’s “take” and that is OK with me, I just wasn’t sure this particular set of takes was a good fit with me or my players.

“All bridge officers have to spend 25 points on a variant of Compartmentalized Mind?”

As another example of a hiccup: the use of the “Multi-Role” template is an attempt to use the rules to handle a situation where a starship might have a crew smaller than 10, or smaller than 8, etc. This is an admirable attempt, seems useful, and it’s an interesting approach, but the +50 cost per role seems like a high figure to choose, and it is pretty unworkable.

GURPS Traveller: First In (3e) managed to do a one-person starship crew template with 80 or 90 points, although I feel these templates were a little under-powered. This PDF goes too far in the other direction: it is suggesting that adding the “key abilities” of another crewman’s job always costs 50 points, leading to a cost of hundreds of points for multiple specialties.

Many of the things listed don’t seem at all like they represent “key” abilities related to occupations: e.g., I thought, “To make someone a ‘Steward’ in addition to their primary job, I am directed to spend 20 points to raise their IQ? Hmm.”

“To make someone a ‘Steward’ in addition to their primary job, I am directed to spend 20 points to raise their IQ? Hmm.”

OK. I know I can adjust these or disregard the advice of the template, but I think what a lot of GMs are looking for is templates you can just hand over to novice players without too much tinkering.

I’m sorry this is such a downer as a review! I should add that there are two really neat ideas on p. 7 of this PDF for using “Higher Purpose” (p. B59) in a starship setting. Those were great!

And although I dislike that it was required for bridge crew, it is interesting to think about a new Multi-Tasking advantage (p. 5) that is a variant of Compartmentalized Mind (p. B43) which changes the advantage from exotic to mundane. I have seen some interesting discussion of multitasking on the GURPS Forum but this is a new take to me.

Verdict: I don’t see a final purchase price set for this anywhere but I’m guessing that this is probably not worth buying no matter what price is set. GURPS novices should instead use their money to obtain Chapter 9 of GURPS Space. If you already own GURPS Space, try Chapter 6 of GURPS Traveller: Interstellar Wars.

GURPS vets who already own both of the above books but are looking for starship crew inspiration are better off mining older 3e GURPS Traveller books for ideas. My two old blog posts (one and two) could be a guide as to which books to look for.